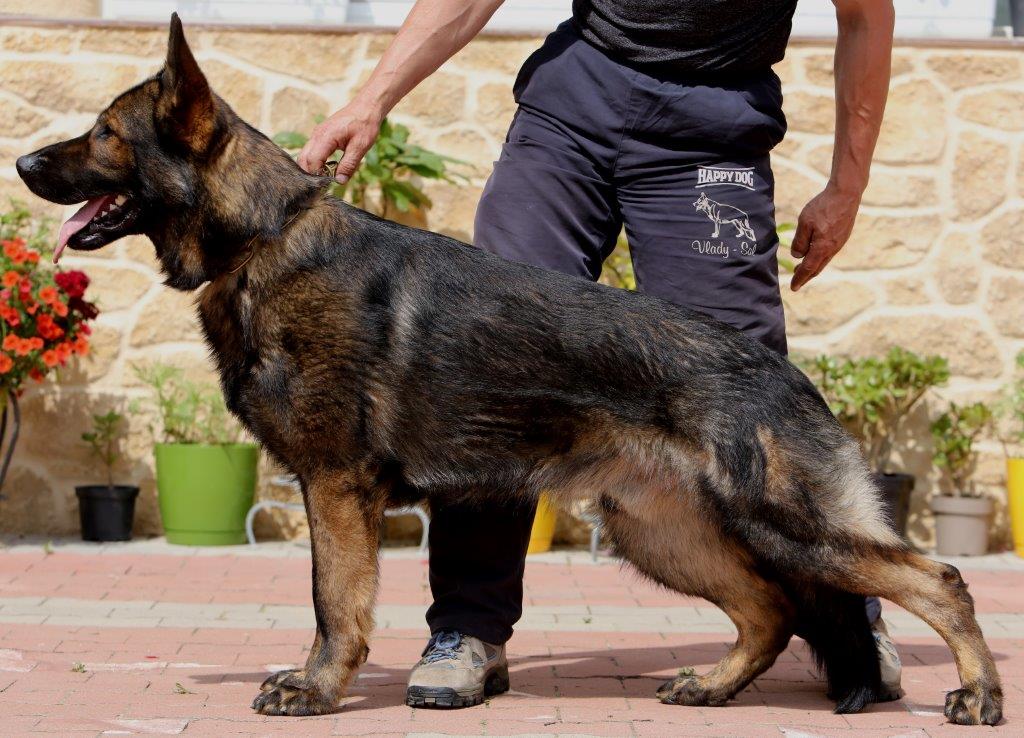 Luxor, one of the top three producing German Shepherds we have seen in the last 30 years. The other two remained in Europe until retired. We are fornunate to have Luxor in The US.
The pictures of Luxor on this page were taken in Europe at two years old when we purchased him. He is 66 cm at the shoulders (standard is 60 to 65 cm) and at the time weighed 88 lbs. We thought he was so impressive at the time. By two years old Luxor had put on another 10 lbs of muscle mass so began weighing in at 98 to 100 lbs! In recent years he gets up to 110 lbs and still in "working weight"!
‍
If we move past Luxor's appearance he is incredible even when it comes to just obedience. Luxor is pain-stimulated which means when he is corrected it actually increases his drive and enthusiasm. When combined with Luxor's drive to work he is simply captivating to his handler and anyone watching.

When it comes to Luxor's protection it's hard to really do justice with any description. If we are using a scale of 1 to 10 then he has to be a 15! (okay impossible if the limit is 10 but he is far beyond those few dogs that earn the 10 rating). The shear intensity of Luxor's drive (prey and defense), the full bone-crushing bite, the speed in which he assaults his opponent (whether biting or muzzle attacks) is just incredible. Most decoys would describe themselves more as his victim than his opponent.

Luxor was bred in Europe just prior to his arrival to the USA. We have tried repeatedly to buy his progeny without success. No one will part with them. In the last year a friend of CPI purchased two extraordinary females specifically to breed to Luxor. The breeder is "von der Nordostkönigreich" (from the Northeast Kingdom) and the puppies will be available exclusively through CPI.

The few Luxor breedings that have taken place in the U.S. would stand up to the most extraordinary litters in Europe. As these puppies return at 7 to 8 most of age for training they have extraordinary drive, hard full month bites taken completely into the backs of their mouths. This is day one, session one and usually it happens with the very first bite. It just keeps getting better, and more extreme, with every session.

In contrast most puppies in Europe are trained several times a week starting at 8 weeks old to be able to have this type of bite at 7 to 8 months of age. When it comes to drive, few dogs produce as much drive as Luxor.
‍