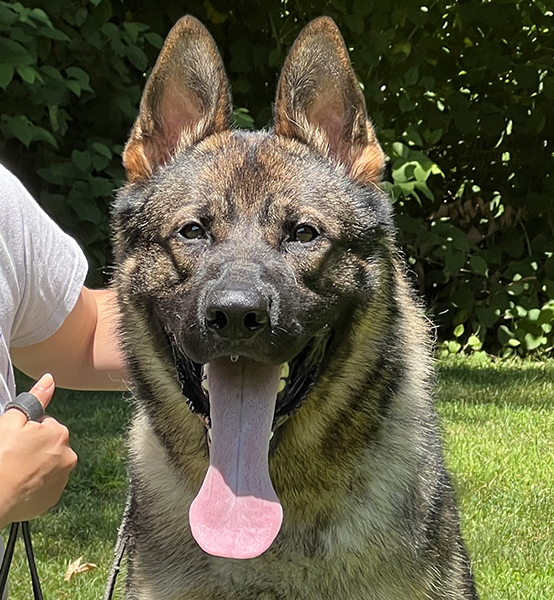 Edgar is a very large (100lbs) powerful looking sable. He is a combination of extremes that we usually don't see together. At 100 lbs he is very large by today's standard yet performs like a a very agile 75 - 80 lbs dog. This includes his speed and flashiness in obedience. This includes animated heeling, jumping into commands like sit and down and turning around on a dime whenever recalled.

Then there is personality. At home Edgar looks like a big huggable laid-back bear. If he is outdoors meeting people he switches from laid-back to a bigger-than-life personality. When he is engaged in play with a ball or tug, Edgar is always at level 10 in drive, but always mindful of respecting rules (not touching the toy unless instructed, being careful of hands when allowed to take his toy, etc). Although Edgar enjoys everyone he meets he quickly returns to being mesmerized by his owners. This includes both adults and children.

Then there is Edgar in protection. First, he has the drive of at least two, if not three, outstanding protection dogs. The second thing that stands out is sheer force. He is like a high-speed train that has no intention of stopping at a mere obstacle on the track but instead plows right through it. In this case the obstacle is any opponent. The power of his bite is extreme but it's that force of trying to plow right through the opponent that is so devastating. Then comes Edgar's thrashing the opponent around when he finally slows down. It's always entertaining to watch, and so surprising to anyone who knows the laid-back teddy bear who lays around the house.