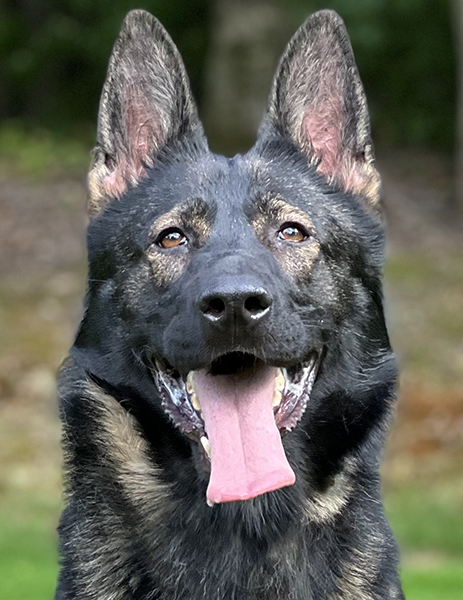 We were asked by a friend, who happens to be a breeder, to find for him the most extreme German Shepherd female in all of Europe. This is no small undertaking. Europe is quite large and German Shepherds are plentiful. Besides, how does one decide any one specific dog is “the most extreme female in all of Europe”? Then we came to Enigma. To put it mildly we were dumb founded. Immediately Enigma arrives on scene with a presence that we’ve only seen in a few males. It’s mostly personality but certainly supported by her size, striking color, plush coat and an intensity she brings to every thing she does including just standing still!

Protection is more of an event and spectator sport than a training session with a powerful dog like Enigma. In protection she can be “turned on” (barking showing agression) in a fraction of a second, we are convinced Enigma would turn on to a marble statue, a rock or a tree if she was instructed to do so. The power that is immediately unleashed when Enigma is turned seems surreal. Then it continues to increase. The same intensity is seen with biting as well as fighting.

Enigma has been great with children, other dogs, cats and even chickens. She is also happy to meet anyone, but unless you’re her owner, Enigma usually seems like there is something more important (ie. a mission) that demands her attention.

Was she the “most extreme female in all of Europe”? We cannot say for certain. What we were able to say is Enigma is the most extreme female we have ever bought, or seen. And we have seen a lot of extreme dogs. As a result of Enigma having an unusual heat cycle it has been decided she is not optimal to keep for breeding. A very bad thing for the waiting list for puppies out of Enigma. A very fortunate opportunity for anyone wanting such a unique guardian.