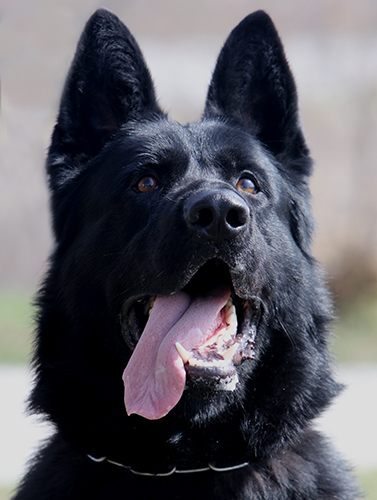 We've been fortunate to purchase some extremely large German Shepherds of of late. These have included Dravik and Paxo. Even they can not compete with Aaron at 120 lbs. As a matter-of-fact Aaron and a dog named Vinny are the two largest German Shepherds we've seen in Europe in the last 20 years. His skills are in proportion to his size!

Aaron has tremendous drive, power, strength (bone crush bite) and extreme defense (aggression) which he's happy to use instantly. By instantly we mean if he were sleeping and instructed to "turn on" he would be turning on as he was opening his eyes and standing up. That's something we expect from Belgian Malinois. Most German Shepherds would need to open their eyes, stand up and see the threat. That can all happen within a moment or two but usually there is that momentary delay. German Shepherds with intense aggression like Aaron combined with that instantaneous response are the optimal dog when facing any threat. We've had this quality make a difference for a client. Aaron is also very territorial by nature. He will automatically protect home and property until told otherwise. Once instructed to turn off he is just as friendly as can be. That includes with children. He's really a gentle giant when not protecting.