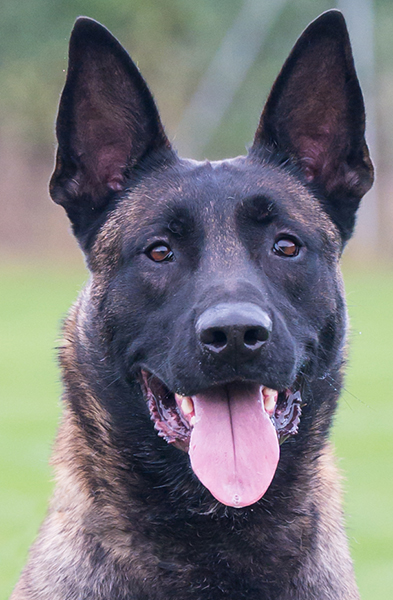 It’s hard to describe Kosta given his many extremes. What seems to stand out the most is Kosta’s powerful appearance. He has an extremely large head that pictures do not do justice. Then the body to back it up. At 67cm tall he is head and shoulders above 99.9% of Belgian Malinois and larger then most large German Shepherds. However we happen to think his striking beauty outweighs his extreme size (97lbs) and build.

As for background, Kosta was raised with 6 and 8 year old boys along with 2 female German Shepherds. His owner has another Malinois he is competing with nationally, however, that dog was not compatible with other males. Kosta lived in the house while the other male lived out doors in a kennel. Kosta was also raised for sport with very precise and motivated training. Given Kosta’s pedigree, size, structure and performance the plan has been to begin competing next season for sport and promoting him for breeding. That plan has just changed. Kosta’s older “brother” has had a sensational year in competition so the decision was just made to continue in order to make next year’s world team. In order to do it means there is no time to do justice by Kosta. A huge win for us.

Kosta's personsality is very friendly, extremely confident everywhere he goes, and just oozes personality. You can get a sense of this just watching him relate to his handler in obedience.

In protection Kosta is a beast. His drive is powerful, intense and his bite crushing. He also uses his size and weight to bear down while biting to make fighting him an impossibility. His bite alone has made most decoys unwilling to get into a bite suit with him. So far no one has been willing to take undercover bites. We think our American staff will rise to the occasion when it comes to enduring pain but probably under protest.

We purchase a lot of dogs we call one-of-a-kind, so describing Kosta as such puts him in a class with a lot of other dogs. If you see his pictures, watch his videos we think you will agree he is in a class all his own.