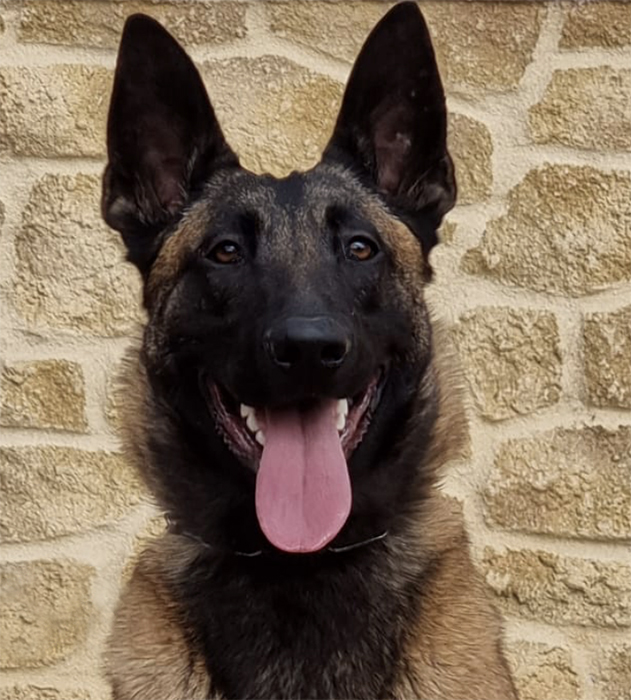 Iris is a one year old female Malinois out of Adonis (photo below). Adonis is an international competitor and one of Europe's most sought after stud dogs. He is known for many things including extreme drive, speed, precision performance as well as his size and beauty. As Adonis fans we see a lot of breedings taking place in Europe, and his pups growing up and entering dog sports. We believe we have bought a few of his best progeny. To date Iris along with her brother Iron are the two largest and among the most beautiful Malinois we have ever seen.

Iris was pick-of-the-litter for females and raised with her brother Iron who was the pick male. Their upbringing was simply extraordinary. As with most Belgian Malinois in Europe Iris was prepared for dog sports. At the same time she was also prepared for search & rescue. Prepared as an up and coming athlete might be prepared by a professional coach. Iris' breeder has successfully bred, raised and trained her dogs for S&R for the last 30 years. This preparation included EXTENSIVE socialization in order to meet as many types of people, environments and situations as possible. The more unique and stranger the better. This would often (day after day) require leaving early morning and returning ilate into the evening. As a result Iris can walk through a group of cats without a second look (regularly sees a group of 10 at the local horse barn), pals around with dogs of every size, shape and color (males and females) and has never met a child or adult she didn't enjoy.

What stands out to anyone who meets Iris is her personality. Now Malinois' are known for forming intimate bonds with their owners. They are also known for their desire to please. Iris (and her brother) are different. It's beyond just a special bond and desire to please. They have a unique way of looking at people to seemly ask what they want. They are spoken to as one would speak to another person. Iris and Iron both seem to almost always understand and act accordingly. This is at home, or out in public (almost always off-leash). This has been with her owner, their family as well as guests. This week it has transferred to our trainers in less then 24 hours. This keen ability to understand people, the social awareness to also understand situations and act accordingly, make Iris one of the most interesting dogs our European trainers have ever had the pleasure of knowing.

Iris' protection is not only outstanding but she is extremely easy to handle. To the point that if told protection is over Iris doesn't seem to give it another thought. She simply walks away as if she had just played a game of cards and is now going to water the garden.