Training for your Dog

Overview - Training For Your Dog

Training For Your Dog 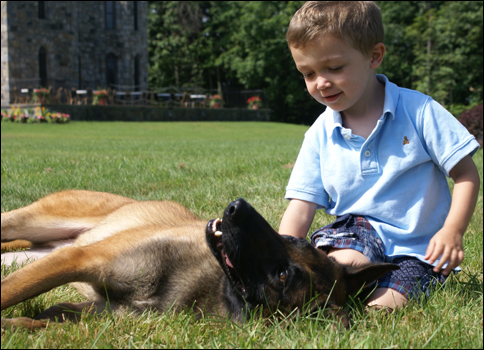 Our dogs are affectionate, friendly and loving companions with impeccable manners who are trained to respond off-leash to your commands the first time, regardless of the situation. They also have the ability and skills to defend you and your family should the need ever arise.

There are a few choices to be made when considering a fully trained dog. They include the breed, the caliber of the dog, the training program and the type of customized training that would be useful given your home, lifestyle and expectations.

The first question is usually breed. For most of our clients, it is either the German Shepherd or the Belgian Malinois. While there are similarities between them, there are also significant differences: size, temperament, personality and performance. Understanding those general differences can be useful.

Other breeds, such as the Rottweiler, Doberman, Giant Schnauzer, Boxer and Dutch Shepherd also are available.

European German Shepherds come in a variety of colors including black and tan, black and red, solid black, grey sable (the original color of the breed), red sable, dark sable and black sable. The average male tends to weigh 80 to 90 pounds, with the average female weighing 55 to 65 pounds. Of course there are exceptions, including oversized males that can weigh more than 100 pounds.

The Belgian Malinois typically is smaller (average male is 65 to 75 pounds) than the German Shepherd, and has a shorter coat. The breed is considered by most to be the first choice in K9 law enforcement, and excels in competitive dog sports. Outside of K9 law enforcement, however, the breed is relatively unknown.

For more about the differences between the German Shepherd and the Belgian Malinois, read “The Best Breed for Your Needs” on the CPI blog page.

The second choice to make is the caliber of dog. The higher the caliber of dog, the greater the dog’s ability to manage a threatening situation. This can be likened to the difference in ability of the average member of the military versus someone selected for U. S. Special Forces or U. S. Navy S.E.A.L.S.

From an investment standpoint, the greater the dog’s natural ability the higher the price.

The desire to protect and a dog’s natural ability alone are not enough. Viable protection requires specific skills, and (returning to the military analogy) skills require training. Our fully trained dogs complete either our Executive Protection Dog program or our Elite Family and Estate Protection Dog program. These programs include innovative solutions to problems inherent with utilizing a protection dog during a robbery, home invasion or assault.

These options include preparing a dog for defense from both aggressive and passive threats (passive threats the more difficult of the two), as well as Advanced Handler Protection skills such as the Secure by CPI. This is an exercise that enables an owner to focus on getting himself and his family into the safest place possible. While the owner focuses on that, the dog focuses on protecting the owner. He or she moves with the owner, while showing aggression, and remains positioned between the owner and the potential threat regardless of the owner’s actions. The dog is trained to walk backward if necessary, while showing aggression, in order to remain between the owner and the threat. This all happens without the need to physically restrain the dog, or even touch his collar. Of course, dogs are also taught the fighting skills necessary to manage a violent encounter such as a home invasion.

CPI’s decision in placing a dog in a specific program usually is associated with his level of ability. The greater the level of ability, the more advanced the training program.

In addition to our comprehensive standard programs, we offer additional advanced exercises for clients with unique needs. These include advanced exercises like the “Hafen,” designed to protect college students when entering their dorms, apartments or vehicles; “Attend,” designed to protect children from abduction; and the “Traitor” exercise for use in countries where kidnapping is an issue.

As the first steps in the process of determining which breed of dog and training program are right for you, we recommend that you fill out our questionnaire and call for a personal consultation.

Your answers will assist our trainers in helping you to choose a dog whose personality type matches your specific lifestyle and personal preferences. And once we know what you expect from a protection dog, we can customize his or her training to make the transition to your home as smooth and enjoyable as possible.