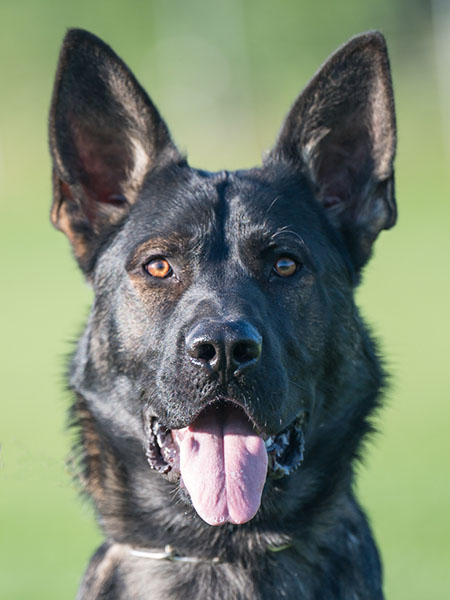 Haddi is a one year old black sable male. Although medium size in height, he has a large head, powerful build, and physically makes an impression.

In addition to Haddi’s natural ability and performance we absolutely love his background. Haddi was raised around a lot of children as well as a large number of dogs. These dogs ranged from a Chihuahua and Border Collie, to German Shepherds including a male with a very strong personality. Not only has Haddi been compatible with a dominant male, he has done so while himself still being very confident, outgoing, and gregarious. Haddi and his “friends” not only lived and played together, they have enjoyed swimming daily at a lake during the summer months. Another aspect that we love about Haddi is the performance he puts on. All of our dogs learn to heel, but not all dogs look like they are entertaining while doing so. Haddi has that extra pizzazz that always draws attention from onlookers.

In protection Haddi is extremely powerful, fast and INTENSE. His owner taught him when guarding a threat (keeping them at bay) to do so by showing aggression in their face! It’s something that is not easy to train, and clearly communicates “don’t so much as move an inch”.

Whether you are looking at Haddi’s dark color and stenciling on his feet, powerful head and build, his attention getting obedience and intense protection, the one common denominator is - striking.