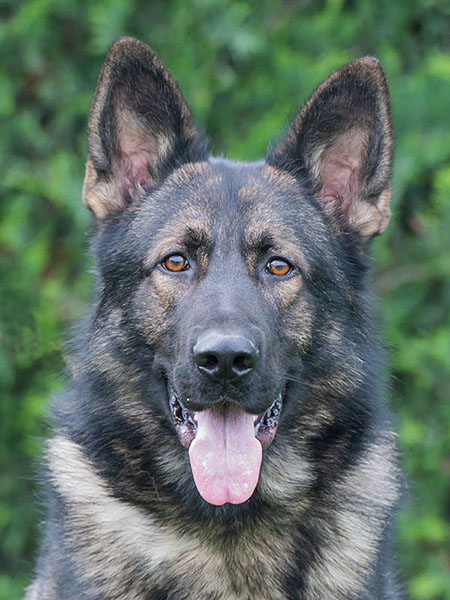 Fiji was the pick-of-the-litter out of a two-time world championship competitor. He has been raised under the guidance of that same trainer. If Fiji were allowed to compete he would no doubt be not only extremely competitive but also a crowd favorite much like his father before him. You really don’t need to know anything about training, including obedience or protection, to see what is meant by being a crowd favorite, watch some of the videos. In obedience, he just floats across the field with such flare he captivates anyone watching. In protection, he doesn’t just bark or show aggression, It’s hard to describe but it’s almost like he is screaming obscenities right before he annihilates his opponent. We are convinced that if his owner was targeted by a dog-savvy drug addict unafraid of confronting a protection dog, taking one look at Fiji when “turned on” and they would be getting away as fast as possible.

Fiji has been raised with children in a very active household. He has been around other animals daily including cats, chickens and horses. Whether around people, dogs or other animals he is always Mr. Personality (affectionate, playful and very bubbly). He can be sitting beside his owner or handler and can captivate people from across the street. He oozes this personality wherever he happens to be. Then if given obedience commands he starts performing and his audience quickly becomes a fan club.

We love the way Fiji “screams obscenities”, also the speed in which he launches his attacks. In and of themselves these are entertaining but it isn’t what makes Fiji, or any other dog, a protection dog. Fiji’s over the top aggression makes it extremely easy to turn on to a threat in a fraction of a second. His bite is not only hard and full but crushing. In a real life encounter Fiji would not be simply physically controlling a threat with his bite, he would be inflicting a serious amount of pain, and in all likelihood, serious damage to the aggressor. If that attacker happened to be oblivious to pain as a result of narcotics, all the better. Fiji thrives not only on biting, but fighting. He will do so as long as needed.

Usually we suggest that strategically if you have to use your dog to protect you, leave him or her biting until law enforcement arrives. Maybe not so with Fiji. As long as the threat is not oblivious to pain it would take Fiji very little time (maybe moments) for someone to be pleading for him to be stopped. If told to release it is very unlikely someone would be willing to try a second round. They would likely sit/lay there subdued until law enforcement arrives. We propose if you have multiple armed guys coming into your house in the middle of the night, this is the level power all of us would want. It’s a devastating consequence that immediately stops the threat in their tracks. Most dogs, even great ones, do not have this level of stopping power. Those few dogs that do offer this level of protection do not have Fiji’s looks, personality nor entertainment when given a command.