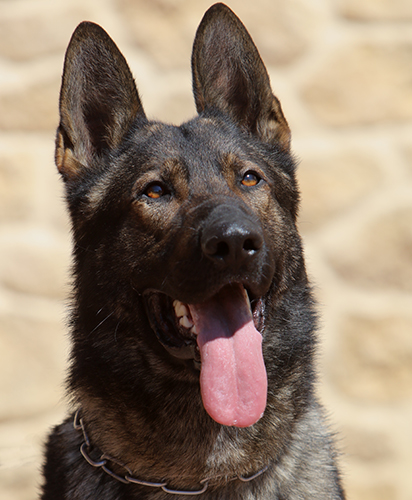 Best is a two year old sable bred by a very respected breeder specializing in dogs who excel in both sport and law enforcement. The breeder has also been competitive in dog sports including competing at national championships. Best was the pick-of-the-litter and kept by the breeder as a future stud dog. The intention was to compete with best in order to promote him. Then Best grew, and grew and grew some more. As Best is now oversized at 67 cm (standard is 60 to 65 cm) he will attract less breeders to use him for their breeding program (most breeders want an upper medium size dog - 64 cm and 80 lbs). Bad for the breeder, great opportunity for us.

Best’s training is precise, highly motivated and capable of high-level competition. Competing would have begun as soon as this year's trial season opened (usually spring but is closed because of Covid-19). Just from training at dog sport clubs regionally Best has already developed a following. Best has INTENSE aggression (defense), powerful drive, strong nervous system and desire to engage a threat. His performance in obedience is flashy for such a large dog.

How does Best's makeup and background benefit us in our Elite Family and Estate Protection Dog program? Best can “turn on” in a fraction of a second (common for Malinois, not so common for Shepherds), when “turned on” he has explosive INTENSE aggression (a lot of great dogs can have high pitched barks as a result of their prey drive), between his size and drive Best has the ability to physically subdue a large violent attacker (rather than just biting them while the dog is thrashed around as can happen with smaller dogs like the average Malinois). Best is also able to endure a fight for an extended amount of time and is very forward when engaging a threat. If he were a person and a bodyguard Best would be the type to not only jump up to protect you if a threat came into the room, but actually go over rather than around tables and chairs to engage the treat as quickly as possible. We can teach most dogs to do this as part of learned fighting skills but there’s a difference when a dog wants to do this naturally. It’s a matter of having a lot of heart when it comes to fighting.

In everyday life Best is extremely confident, has a bold personality in public (gives the impression he can handle himself) but a softer and affectionate personality when at home with family.