Covid and the Castle

Your home is your castle. You want it protected, and your family within it. Most people are surprised to learn that their home may be where they are most vulnerable. If someone were to break into your home you are boxed in. How are you, and every member of your family, going to protect themselves? What about when you’re at your worst? Maybe sleeping, in the midst of an argument, doing a project, family members in different parts of the house. Even concealed carry within the home has limitations in everyday life. It has always been our belief that you need as many layers of security as possible. Those layers should function on three levels; to deter, detect and defend.

Is there an increased risk of being a victim of a violent crime in the midst of this Covid -19 crisis? A lot of people think so. Gun sales have skyrocketed and ammunition is scarce. Is crime going to increase as a result of desperation? So far crime has actually decreased in most communities. This decrease is thought to be the result of people off the streets. At the same time the crimes that are taking place seem to be bolder. We don’t have a crystal ball so we really don’t know what the future holds. We are hopeful given the trajectory of people being infected seems to be flattening. We are also hopeful in President Trump’s plan to reopen the economy sooner rather than later in order to avoid consequences worse than the virus itself. If these two changes prove to be true, they are an unexpected light-at-the-end-of-the-tunnel. At least unexpected so soon. Yet as inspiring as they are they may not stave off increases in crime.

It seems to us, and many security professionals, that the greatest threats may lurk 6 to 12 months from now. Not every business will reopen. The odds are not every hard working employee will have a job to return to. How many new jobs will be available? Will they be available in every sector of our economy? What might you be willing to do without enough money and children to take care of? Helplessness and hopelessness breeds desperation. This worse case scenario may never come to fruition. Then again, you don’t need rioting in the streets to be the victim of a home invasion. Has your risk of being a victim of a violent crime increased or decreased this year over last? We think the answer is obvious. What are you doing differently to address that increased risk?

Keep in mind an increased degree of risk should influence urgency, not strategy. Strategy in how to deter, detect and defend is a question of the type of threat that concerns you. Statistically you may have the lowest possible risk of being a victim of a violent crime yet if tonight you’re faced with a home invasion your degree of risk is immaterial. Again, risk determines urgency. The type of threat should determine strategy.
‍

In the best of times there are always people looking for soft targets in every community. Just Google “home invasion” and the community you live in. We’ve seen for ourselves within New England bedroom communities violent home invasions take place with horrific consequences. In one case it was a matter of four teenagers randomly choosing a street, then two houses and then literally playing “eeny, meeny, miny, moe” in choosing which house to invade. Their intention? To experience committing a violent murder like they did in a video game. We were asked to help the family members who survived. That’s an example of looking for a soft target, yet in this case with very casual motivation but extreme intention. We’ve also dealt with surviving family members of an even greater act of violence simply because their home had a valuable silverware collection that could be sold. Or recently a client’s husband murdered by a disgruntled employee. An employee who actually had every reason to be appreciative rather than disgruntled. What happens when we dramatically increase need, decrease options, and people feel hopeless and helpless?

How many layers of security do you have in place? How will they work in the worse case scenario of everyone sleeping or you being distracted? It’s not just a matter of owning a protection dog, but certainly an import piece. Your alarm may detect (if on) but will likely result in law enforcement arriving after the fact. A gun is a viable means of defense but unable to detect, and unlikely to deter a violent criminal once in your home. Also, do you really want to kill someone who is so desperate to feed their family that they are willing to break into your home? For many people the answer may be a resounding yes! It’s something worth thinking about. If you used a gun and a dog could have managed the situation how will you feel? How will you family feel? Outdoor sensors, lighting and cameras are great at early detection. They may even offer some level of deterrent but offer nothing in the way of defense. That’s assuming they are on and being paid attention to. A protection dog by CPI uniquely provides for all three (deter, detect and defend).
‍

In summary, we recommend as many layers of security as possible. You should judge the means of deterring, detecting and defending based on the types of threats that concern you. We suggest thinking in terms of security and it’s usefulness when you’re at your most vulnerable point. For most people when at home it’s showering, sleeping or everyday distractions. Then using this time of increased risk to actually do something about it. Remember, guns don’t replace dogs, nor do dogs replace guns. Neither replace alarms and cameras. You need as many layers of security as possible. 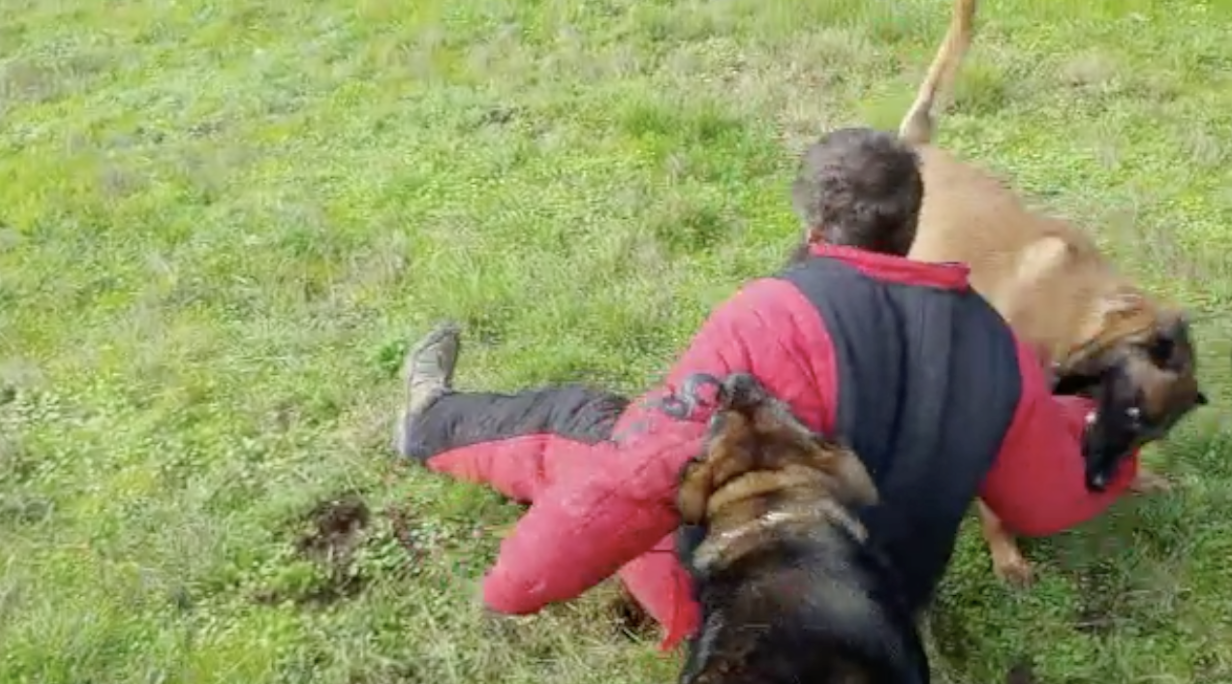