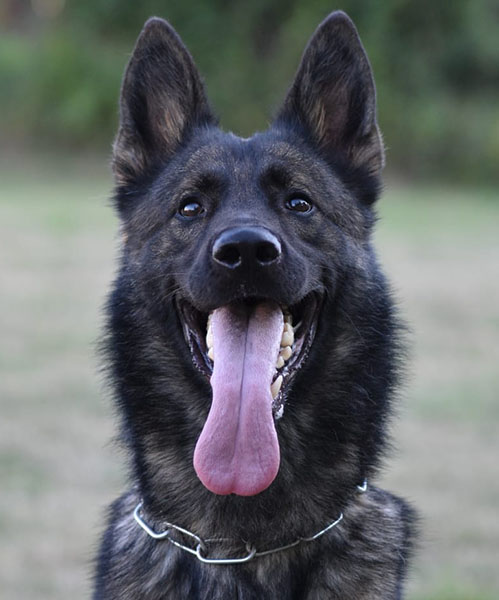 Zen is a two year old dark sable male raised with children and 5 other dogs. Zen not only has a friendly personality like most of our dogs, he’s a social butterfly. When guests are over he loves to move from one person to the next almost like he is welcoming each of them personally.  He isn’t so different with dogs. He’s been raised to regularly be a part of large groups (10+) of dogs. Often with new dogs he's never met. They have ranged from lots of other German Shepherds, to wire haired Dachshunds, Belgian Malinois, French Bulldogs as well as two Great Danes. What sets Zen a bit a part from other dog friendly German Shepherds is he not only is tolerant of other dogs but he thoroughly enjoystheir company.

Zen was the pick-of-the-litter, raised and trained by the breeder, and lived in a very active household. He is very powerful (strong drive) and quite intense in protection. Zen's intensity makes him very easy to "turn on" at a moments notice. His personality and desire to please makes him extremely easy to handle.