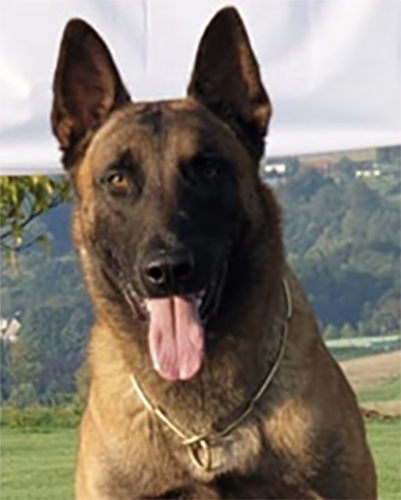 To begin with Jax is a giant when it comes to the Malinois. He is 68 cm tall at the shoulders. In comparison the breed standard for Malinois is 64 cm for males. Most males are 63 to 64 cm. The German Shepherd standard calls for males to be 60 to 65 cm. These days a 65 cm German Shepherd male is considered pretty large (average for working lines is 63 to 64 cm). We think of Jax as the LeBron James of the breed. At 15 months old he presently weighs in at about 85 lbs. As an adult Jax should weigh in between 90 and 95 lbs.

Socialization is always important in raising a dog. Jax's owner made socializing an art form. If he left the house Jax was by his side. That was everywhere from shopping and restaurants to camping, hotels and tourist attractions throughout Europe.

Jax has been raised around others dogs as well as children of all ages. When it comes to dogs we mean around a lot of dogs. Jax not only met dogs where-ever he and his "dad" traveled but when at home he regularly "hung around" with 6 to 8 dogs on a daily basis. We have included some footage of Jax with his "friends" as well as with a 9 year old girl he had just met.

If in height Jax is a professional basketball player then in build he's a line backer. He uses his size and weight to plow right through people in protection. If his size and power doesn't stop someone dead-in-their-tracks his love of fighting will finish the job.